How Roz Grossman took singing, Scrabble and swimming from Brooklyn to her new home in Kfar Saba 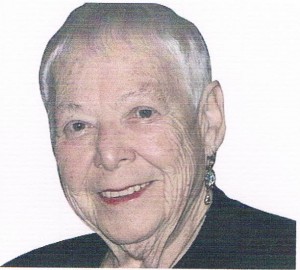 Awesome may be a word that many associate with inarticulate teenagers, but it is the only word to describe the feeling of playing Scrabble with Roz Grossman. I looked in complete awe as she produced a 60-point word within two minutes of play.

She’s bubbling and dynamic, and both her outward appearance and her personality belie her 85 years. Well-known in the Jerusalem Scrabble Club (“Killer division,” she adds, with a twinkle in her eye) she used to come over to Israel just to play Scrabble (and visit her two sons and their families) until she finally made aliya with her late husband Rabbi Herman Grossman in 1993.

She was born in 1926 on the Lower East Side, one of eight children.

“We were very poor, but we didn’t know we were poor, so we were happy,” she says now. Her father sold clothing from a pushcart, and her mother helped him.

“It was the Depression and the days of handouts,” she says. She remembers standing in line for milk and potatoes, and her mother putting the clothes and shoes in the oven so they would be warm when they dressed in the morning. She also recalls singing on the Jewish radio station WEVD with two of her sisters as a group called The Spicy Sisters (from her maiden name Gewurz, meaning spice) many decades before Victoria Beckham, et al, were doing their thing.

“We always had music,” she says. Her mother would play the piano at the local community center in the evenings after work. There was no piano at home, so her mother practiced all week on a “deaf” piano, a large trunk painted with a keyboard.

Friday nights were for singing.

“There wasn’t much food, but we sang zmirot [Shabbat songs] for hours,” Grossman recalls.

She studied at Brooklyn College and the Jewish Theological Seminary and earned a degree in education. It was there that she met her husband, as he also studied there after graduating Harvard.

Her husband started his career as a military chaplain in the US air force and then held a series of pulpits, while she went directly into teaching and ultimately became principal of several Jewish day schools.

Being married to a Conservative rabbi meant moving around a great deal and living in places like Biloxi, Mississippi, and Kalamazoo, Michigan. It was there, while her husband was serving the Congregation of Moses in Kalamazoo, that she was introduced to Scrabble. She found it addictive and instantly became good at it.

With two sons, Danny and Tuvia, having immigrated to Israel (another, Joel, lives in California), she and her husband would often visit, and she became a regular at the Jerusalem Scrabble Club. She had met the late Sam Orbaum even before he co-founded the club, having been introduced by mutual Scrabble-mad friends from New York.

“I got a call from him while I was staying with my son in Givat Shmuel – asking if he could come and play Scrabble with me,” she says. “He came and stayed all night. We played 10 games, of which he lost nine.

After that, I was thankful if I ever won one game against him.”

She came regularly to Jerusalem just to play, and on one memorable trip brought a suitcase full of Scrabble sets that she’d collected from tournaments she’d played in the States and which would just have been thrown out otherwise. To this day, she is known in the club as “the fairy godmother.”

In 1993, her husband retired from the job he had held for 21 years as chaplain at the veterans’ hospital in Huntington, Long Island, and the Grossmans settled in Kfar Saba – not far from the children, grandchildren and great-grandchildren. Her life could be characterized by the three “S”es – singing, Scrabble and swimming. She joined a choir in Karnei Shomron, sang and played the piano and accordion for singalongs, helped put on a Purim shpiel she had written – which included training the protagonists, all people living in a retirement home, to act and sing – swam in the local country club and, of course, played Scrabble as often as she could. Her husband did volunteer work, and they were both active in the local Conservative synagogue.

Her husband died 11 years ago, but Grossman is never alone, with sisters, nieces and nephews not far away, and being, as she puts it, the designated driver for many of the great-grandchildren, with whom she also plays Hebrew Scrabble.

“The fun thing is watching the kids grow,” she says. “The more you have, the more you want.”

She feels she can sum up her life in the words of the Psalmist: “Serve God joyfully – come before Him in song.”

She also subscribes to the theory that, with regard to the brain, one should “use it or lose it” – which is probably why she still plays Scrabble three or four times a week with a friend.