There are the official rules of Scrabble – and then there are the “rules” that Club members have authored or learned and applied. A sampling:

These words of wisdom were prompted by two separate incidents.

1. In my first season at the SOJSC (Season 59, 2012) electronic devices were not available for word adjudication. My opponent challenged a word. She proceeded to look it up in the OSPD3 book, and declared it phony. Only later that same evening did I learn that the OSPD is abridged (“for school and recreational use”), and must not be used for word adjudication. Indeed, my word was found in the unabridged OWL (TWL06) book. (If I recall correctly, I won the game anyway.)

However, the first incident pales in comparison to the second one:

2. On October 21, 2018, in a game at the Tel Aviv Scrabble Club vs. our own Joel Bailey, my opening rack was AAMOQU?. It didn’t take me long to see and play MADOQUA. Joel challenged, and I looked it up in my Android Scrabble Checker app. Phony! (“How could that be?”, methought. “Madoqua is the name of the TASC’s B1 division, so it’s a word I see at least every week!”)

Two turns later, I played a word I was not 100% sure of: MOATING. Another lookup, another phony! (OK, so maybe I invented that word.)

In turn six, I played BURSATE on A1, forming S(WOT) in the process. I was certain about the bingo, but slightly less sure about the hook. Joel challenged the play: phony again! (“I must be hallucinating!” In any case, Joel was producing increasingly hearty laughter, at my expense). I would later hit two bingos (unchallenged) but it was case of too little, too late; Joel had outscored me by a long shot.

Just before the game had ended, thinking that the Scrabble Checker app must have malfunctioned, I picked up my phone. And what did I see? 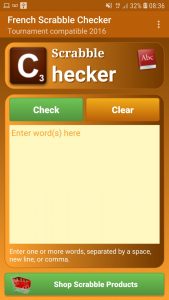 If you don’t see it, well, I hadn’t either for the duration of the three challenges. I had been using my French Scrabble Checker app, which appears nearly identical! And why? Because, between the first two games that evening, I had been discussing French Scrabble words with our own Ami Tsubery.

And that’s the rest of the story. A sad one, but a lesson learned…