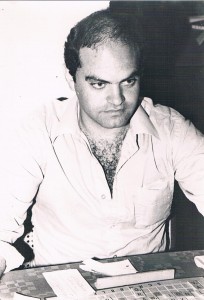 Sam was born in Montreal, Canada in 1956, and moved to Israel in 1981 as a rated North American player. When he found no organized Scrabble anywhere in the country, he set about to rectify that, organizing Israel’s first Scrabble tourney and, from there, 11 Scrabble clubs countrywide. The Jerusalem Scrabble Club, in which he himself played, rapidly became and has remained the largest Scrabble Club in the world.

Sam was 46 when he died from lymphoma in 2002. The Jerusalem Club, which he directed from its founding in 1983 until shortly before his death, was renamed the Sam Orbaum Jerusalem Scrabble Club. An annual tourney is held in Sam’s memory.