Sara entered a Scrabble tournament in Tiberias when she was 67 that she says ‘changed her life.’ 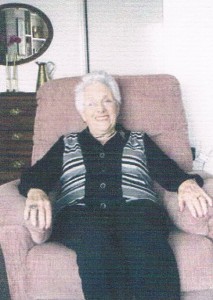 It’s only fitting that “episodic” is the one of the best Scrabble moves Sara Schacter, one of the self-described “parents” of the Jerusalem Scrabble Club, had. “It netted me almost as many points as my age,” says the 93-year-old, whose life has had more episodes than the average soap opera. After all, how many people make aliya twice, see a nation born, enjoy three loves, raise two sons – Jonathan, a lawyer, and Michael, a surgeon – and continue making their mark.

BEFORE ALIYA (THE FIRST TIME) Sara was born in 1915 to parents who left Ukraine and ended up in London. Her father became a Rolls-Royce engineer. “I must have gotten one of those engines too, because it’s served me so well,” she says. On a school trip to Germany in 1932, she saw brown-shirted Nazis and the plight of German Jews, and the seeds of her aliya were planted. “I felt this is a country that has so much culture… all of a sudden they’ve kicked them out because they’re Jewish… and I thought if that happens there, it could happen anywhere.”

THE JOURNEY Their home was constantly visited by Zionist officials, including David Ben-Gurion. “I remember even bringing him a glass of tea and spilling it on him,” she recalls. Among the visitors was poet Ya’acov Orland. Sailing from Marseilles via Cairo, she and Orland arrived in July 1937. He took her to the Hebrew University amphitheater on Mount Scopus and photographed her there. She shows off that photo, plus two others at the same spot, taken 30 and 60 years later.

SETTLING IN She remembers “marching against the White Paper” and working for the Hagana. Her English was useful when someone was needed to flirt with British soldiers, and once she hid someone in her Jerusalem room, “which I did because they wouldn’t suspect someone like me.” She even has fond memories of the tzena (austerity) period, which she calls “lovely. Because first of all you didn’t have multiple choices. All you had was one bar of soap.” Years later, she hated shopping in supermarkets. “I’d much rather stand in line for one little bar” she says. When her family arrived, she moved to Haifa, and met her first husband, Ernst Livny, a lawyer and expert on German reparations. She remembers “my father sitting in his chair with tears running down his cheeks” when the state was declared. She worked in the Technion PR department, but when work forced the family to go to Germany, she left “very reluctantly.” While there, she taught English to young Germans, using Herzl’s Altneuland as a text.

A SECOND ROMANCE While visiting her sister in Toronto, she attended a dinner at the home of labor leader and department store executive Harry Schacter. Letters to Harry from President Franklin D. Roosevelt and Eleanor Roosevelt still hang proudly in Sara’s apartment. The dinner was the night President John F. Kennedy spoke about Cuba, she recalls, imitating JFK’s speech. The war talk scared her, and she returned to Israel, but suddenly word came from Germany that her husband had died. She and Harry began corresponding, agreeing to meet in Paris. “And that’s where everything began,” she says, with walks along the Seine. The two married and moved to Toronto in 1966, but Sara knew she still had Israel in her blood. “I never thought no more Israel, I just thought I’d schlep him back somehow,” says Sara. The couple moved to New York, but Israel was always her top concern. As the Six Day War unfolded, she brought AIPAC speakers to Martha’s Vineyard. The war made her yearn to return, but Harry couldn’t bear the idea of living where he didn’t know the language. “So I said let’s make an interim course. Let’s move to London,” which they did in 1972.

THE SECOND COMING “One winter was very, very snowy, and I felt I had come to the end of the way. I had to get back to Israel. So I said to him: ‘Wherever I am is your home,’ and he said: ‘Yes.'” The next day she flew to Israel and bought her lovely apartment on Rehov Palmah in Jerusalem. In 1982, they made aliya, or as she refers to it “the second coming.” “We had a shaliah – I used to laugh because what did I need a shaliah for, but he was making aliya.”

SOCIAL CIRCLE “I was 67, a youngster. I didn’t know people in Jerusalem and I didn’t want to be a burden on my children,” she says. She spotted an ad for a Scrabble tournament in Tiberias, walked in and met the late Jerusalem Post staffer Sam Orbaum, who later crashed on their sofa, “and that changed my life.” From a small group they developed the weekly games in Jerusalem, which she still attends. “We were the parents of the club. All of my friends came from there – it’s been a wonderful life since then. If I hadn’t met him, I don’t know what I would’ve done.”

A THIRD ROMANCE Harry died in 1991, just when the Iron Curtain fell, and the curtain rose on another chapter in Sara’s life. While in London, she’d been active in the Soviet Jewry movement. When her sister in Toronto went to visit refuseniks in Moscow, she asked if anyone knew of a Solomon Khromchenko, a cousin and a famous Bolshoi tenor. “My sister told me about meeting with him, and I don’t know if I had a premonition or what, but I was very much moved by it,” says Sara. A huge devotee of poetry, she wrote him, including a line from Keats, and a correspondence began. She and Harry invited the noted singer to Israel, but Harry died before Solomon’s arrival. “That’s the day that he arrived at Ben-Gurion, and that’s me looking at him, to see whom he resembles,” she explains, showing a picture. In another, she’s gazing dreamily into his eyes in Moscow months later. “The first is a look of recognition, the second a look of love,” she says. She helped him find work teaching voice development at the Rubin Academy. “It was very, very beautiful. It’s summed up in the pictures. It was totally unexpected… We had nine years together,” she says. Eventually he went back to visit Russia and became ill and died there. A drawing of him hangs on one wall, and she still imagines hearing his voice in the apartment.

ACTIVITIES Sara spends lots of time reading, playing Scrabble on the computer and a little bit of shopping with her aide, Rina. “I listen to lots of operas and have a collection, and then there are my children and family.”

THE FUTURE “I think we’re a pendulum – we swing. I think there will always be a future. I don’t like where we’re at now, but I’m hoping we’ll swing forward to something more resembling what was, from the point of view of spirit.”

ADVICE FOR STAYING YOUNG “First of all, laugh a lot,” she says. Scrabble is her “anti-Alzheimer’s pill” and looking back on her impressive double aliya she says: “I’ve had two pretty winning games.