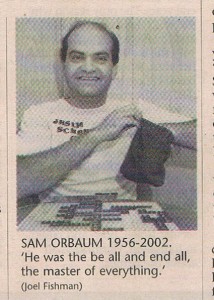 When you hear the contents of nearly 50 Scrabble sacks come crashing down on tables, you know that it’s Tuesday evening at Beit Ha’am, and it’s time for the Sam Orbaum Scrabble Club meeting.

Thermoses appear out of Mary Poppins-style bags, chocolate bars are snapped and opened, and several thuds are heard as the Official Tournament and Club Word list, the Scrabble rules book, or Torat Moshe, as one player calls it, hits the surfaces.

It’s a year to the day since the club’s founder, Jerusalem Post columnist Sam Orbaum, succumbed to an ongoing battle with lymphoma.

Afterwards, the club’s members, most of whom are over 50, sit and reminisce about Sam, who was known for his wit and his warmth.

To people outside this third-floor library in the Gerard Behar Center, Yorkshire-born Orbaum, who moved to Montreal at six weeks old, was perhaps best known for his 20 years of work at The Jerusalem Post.  Orbaum himself considered his greatest acchievement to be the birth of his identical triplets, Odelia, Nomi and Donna in 1990, but for those inside the room tonight, far more important was the way Orbaum revolutionized the Scrabble scene in Jerusalem, and how he made people feel so very welcome.

London-born Sara Schachter, the Scrabble club’s co-founder, says that in the Scrabble club’s early days, “Sam came down from Tadmor, where he was studying hotel management, and stayed on my sofa.  He was like my younger son.”  She adds, “Sam had a special gift of encouraging new players.” 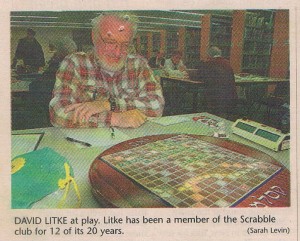 “He was the be all and end all, the master of everything,” recalls David Litke, who has played regularly for 12 years and is in the highest rank of the club.  “He was a master of the game, a larger-than-life figure.  Someone close to him once said, “Everything he did, he did big.”

“He was so menschy, that’s the word that comes to mind when I think of Sam,” says Evelyn Sunray, a member since 1986.

“Scrabble is a mean game, but he encouraged people to be kind.  ‘You don’t have to be good, you have to be nice,’ he used to say, silver-haired member Tamara Rose recalls.  “But he was tough.  If he didn’t like something, he would say so.  There was a man here who kept accusing other people of cheating.  Eventually, Sam just chucked him out.”

Such tactics ensured that the club stayed a warm and friendly place for new members.

“I’ve been coming for three yeasrs,”says Taffy Sassoon, “two of which were with Sam.  He made me feel very welcome.  I think he really loved people. I immediately became hooked.  I think [Scrabble] is a form of addiction.  I really do.”

When Orbaum became sick the second time around, he chose Roger Friedland, a relatively young face in the Scrabble scene, as his successor.

“He tapped me on the shoulder, and said, ‘You’re it,'” Friedland recalls.  At the time, Friedland had been with the club for five years, and had risen from being in D, the lowest ranking, to A, the highest.  More importantly, Friedland had the same attitude about the club that Orbaum possessed.  He was serious about the game, but realized that the main aim was to enjoy it.

“It’s a hard job to take over,” says Friedland. “I’m not as good at multitasking, and Sam was excellent at it.  He did everything at once, scores, pairing the partners, settling challenges and disputes.”

“[The club] hasn’t changed because we’re all making a valiant effort,” says Schachter.  “But it does take an effort”

The hardest thing,” adds Rose Meyer, “is when you do something mind-boggling [in the game] and Sam’s not there to tell.  He’s sorely missed.”

Note:  The third photo is miscaptioned.  It is, of course, Zev Kesselman and not David Litke.