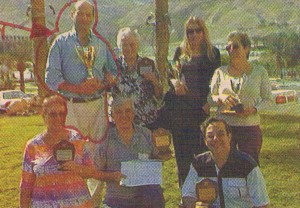 Leaving the troubles of the world behind, 77 Scrabble players resorted to a civil war of words at the tranquil Dead Sea late last week.

Many of the Jerusalem-area players were caught in the massive traffic shutdown on the way to the tournament on Wednesday, caused by the terrorist incident on the Ma’aleh Adumim road.  It was worth the wait for Sam Orbaum, who won the Fourth Scrabble-by-the-Sea at the Hod Hotel.

The Jerusalem Post journalist won 12 of 15 games with a +999 point spread, beating out two Hadassh Hospital employees for the Premier Division trophy.  Steve Goldberg, who dealt Orbaum two of his three losses, finished second with a 10-5, +506 record.  Zev Kesselman was 10-5, +206.  Maor Eichler, a Beersheba native who represented Israel in the recent World Championships in Las Vegas, was fourth.

Liliane Servier of Tel Aviv won the Expert Division, at 10-2, +331, finishing a win ahead of Jerusalem Scrabble Club players Sara Shachter (9-3, +758) and Alice Jonah (9-3, +415).  Vivienne Muhling, a Toronto club player who flew here for the tournament, was sixth.

The biggest story of the tournament was the performance of Naomi Landau of the Tel Aviv Scrabble Club.  Landau withstood the intense pressure of maintaining perfection, and completed an unprecedented 12-0, +1,169 record in the Competitive Division.  She was followed by JSC players Yehuda Meroz (9-3, +582) and Hadassah Braun (9-3, +459).

The players’ vote for the tourney’s best ‘bingo’ (a play using the full rack of seven tiles) was MAFIOSI, played by Mike Corden of Bnei Brak.