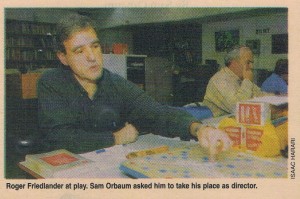 Tuesday night, 7:30.  At the Beit Ha’am library at the Gerard Behar Center in Jerusalem, around 50 people are gathering to play Scrabble.  Some of those shuffling their tiles and sharpening their pencils have been doing the same thing since since the club was founded 19 years ago.  But tonight there are two distinct diffferences.  It’s the third week in a row that the game will be played without Sam Orbaum at the helm.  And, the name of the club has officially been changed from The Jerusalem Scrabble Club to The Sam Orbaum Scrabble Club.  And the players have the pens to prove it.

Many of those at tonight’s game knew Sam for the entire 19 years, right from when he, together with Sara Schachter, founded the club.

The first week the club met without Sam, the week after his funeral, Sam’s parents came to talk to the members, and a sub-committee was quickly established to discuss options for memorializing Sam.

The depth of the members’ loss in the room is palpable.  On a notice board to one side are all the tributes that have been written in The Jerusalem Post.  Some of Sam’s columns, editorials, letters, his death and funeral notices jockey for positon alongside the Scrabble scoreboard listing players with the highest scores and the longest words.  To one side is tacked a thank-you card in painstakingly neat print, from Donna, Odelia and Nomi — Sam’s 12-year-old daughters.

Like moths to a flame, members seeing my notepad and pen, and hearing about this week’s Magazine memorial to Sam, approach me to share their thoughts, feelings and memories about the man they knew and loved.

Sometimes it’s hard to catch what they say, as they talk over one another, so desperate are they to impart their words.  Throughout the night, I will hear similar comments from different people.

“We all loved him,” “Sam was Mr. Scrabble,” “Those poor little girls” [his daughters]…The most memorable quote, though, constantly repeated was: ‘Sam always said: You don’t have to be a good player to come to the Jerusalem Scrabble Club, you just have to be a nice person.'”

Rose Meyer, who has been playing Scrabble since she made aliya eight years ago, recalls coming to the club, wary of entering into competititive Scrabbele and saying to Sam, “I only play for fun.”  He responded:  “What do you think we play for?  Misery?”

“It’s just horrible without Sam,” says Esther Gerber, who has been with the club since its inception. “He was everyone’s special friend.  When a friend called me up and said, ‘Sam’s gone,’ I nearly said, ‘Gone where?’  It didn’t occur to me that Sam would die.  We knew how sick he was, but he’d recovered twice already.  We  never thought he’d go.”

It’s a sentiment echoed over and over by the club’s members.  Sam was feisty, fiery, a fighter.  He’d survived one bone-marrow transplant, not to mention radiation and chemotherpay.  Everyone believed he’d survive the second transplant.

Yet while there were definitely tears in many people’s eyes, there was an unmistakeable sense of fun, friendship and camaraderie as the members readied themselves to do battle on the Scrabble boards.

Anyone who stumbled into the library in the 20 minutes between setting up and starting to play would have been hit by a decibel level reminiscent of an elementary-school playground — unexpected in a group where the average age is 50.

But, as the members constantly pointed out, Sam wanted the Scrabble experience first and foremost to be fun.  And today, that is the legacy members of the club have vowed to carry on.

Roger Friedland, who joined the club five years ago, now sits in Sam’s ‘chair’ at the head of the room.

Quiet and gentle but with a commanding air, Friedland says, “Sam and I kind of hit it off right away.  He felt I had the type of personality to run the club in the event that he wasn’t around — when he went on vacation, for example.

“I was happy to do it for him, but I fully expected him to come back [after his bone marrow transplant].  It’s still a bit of a shock,” he confesses.

“He was a very lively person,” he adds, almost as an afterthought.

Most of the club members agree.

“It’s impossible for any individual to do what Sam did,” says Friedland.  “He did so many things. He managed to play one or even two games simultaneously, and play well.  I’m really in awe of his ability to multitask.”

Sam used to organize the entire club, match up the pairs, and keep the scores.  These days, all those tasks are divided among three or four people.

“The word ‘passion’ would be an understatement to describe his attachment to the game and the competition and everything surrounding the game,” says Friedland. “He was obsessed with statistics.  It was amazing the kind of information he had regarding the club and its players and the games and words that were played.  And most of that time, he kept all the statistics by hand — before computers were as commonplace as they are today.”

While Friedland openly admits that Sam’s personality will be impossible to duplicate, the aim of the Scrabble club is to try to keep the playing experience as close as possible to Sam’s ideal.

“My primary goal is to try to continue with making sure everyone who sits in the room has a good time.  I think that was Sam’s biggest success in terms of developing the club and why people keep coming back and new people like to come to the club.  He didn’t favor better players over lesser players, he made sure everyone enjoyed themselves — that was the primary goal.

“Although,” he laughs, “he was extremely competitive himself.  He didn’t like to lose.  But at the same time he understood that everybody was not at his level and he wanted to make sure that everyone had an enjoyable experience.”

The word that rolls off most members’ tongues is Sam’s “legacy.”

“He left behind a place where people feel a sense of connection to one another and they know that they can come on a weekly basis and have a completely fun and pleasant experience within an activity they all enjoy,” says Friedland.

Peta Pellach is at the club tonight.  She’s only in the country for two weeks, having flown in for work from Sydney.  But despite the short visit, she has made sure to timetable in her two Tuesday nights at the club.  The Pellachs lived in Israel between 1989 and 1991.

“Tuesday nights were sacrosanct,” says Pellach.  “We used to come and Sam was always funny and good-humored.  It is very, very sad, and so different without him.

“Mind you,” she adds, “these people do a fantastic job.  And there’s nothing of this standard in Australia.”

Schachter, who co-founded the club with Sam, says he was “my dearest friend.”  She, too, shakes her head and says, “We just didn’t believe he wouldn’t come out of it.  Everybody loved him, there was so much support and love, and I thought he’d pull through.”

Blinking back her tears she describes him simply, eloquently, with a perfect Scrabble word: ‘ebullient.’  For Shachter, Sam’s legacy is “tremendous.  Much bigger than people realize.  “I believe that he’s eventually going to be known as one of the world’s greatest Jewish humorists.”

She assures me she is not exaggerating.