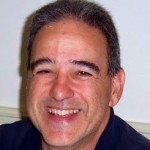 I had no real Scrabble history until I joined the Club, playing casually once or twice a year.  Pam Loval recruited me when I met her at a Rotary Club dinner, and she learned that I love word games. I was at the Club the following Tuesday, met Sam and hit it off with him right away.  When I told him I was hesitant about getting too competitive, he smiled and said:  “Give it a month or two and you’ll be hooked.”  Of course, he was right.  I won C division in my first full season and thirsted for better games in B.  Four or five seasons later, I made it to A.  But as well as the play, it was the warm, welcoming nature of the Club that won me over.  I was amazed that people could be so competitive and so friendly at the same time.

Sam appointing me his successor in running the Club stands out as one of my strongest memories. Though I was far from an experienced player and certainly nowhere near the top of the standings, Sam told me I had the right personality to allow the Club to flourish in his absence.  I suspect he knew his chances [of returning] weren’t good and wanted the Club to remain a viable, player-friendly place.  I think the three years I devoted as Club director validated his trust in me.  I get a lot of satisfaction from that.

After I started playing at the Club, my son Steven — then 14 — began coming too.  During one of his first weeks, he reported a score of 645.  Sam, seldom at a loss for words, was struck dumb!  After a moment, he asked to see Steven’s score-sheet and discovered an adding error.  Steve, it turned out, had scored not 645, but 545.  Still not bad for a rookie!