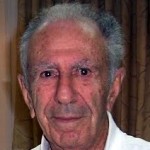 PICAYUNE OF NO SMALL VALUE

My Scrabble history begins before Scrabble.  Growing up in the 1930s, I played word games like Lexicon and Kanugo.  We also had a bag of letters with which we played World Making And Word Taking, identical with what we now call Anagrams.  You could call all this ‘proto-scrabble.’  I began playing Scrabble some time in the 50s.  By then, I was living in Israel, but played with my sister and nephew (Philip Nelkon, later British national champion) on my frequent visits to England.  So I soon acquired more than just the rules, but I didn’t know any other players in Israel and didn’t even own a set.  Then came the first Scrabble tournament in Tiberias, for which I registered in the Casual division.   I wanted to do so again for the second, but Sam would no longer let me.  I was Competitive, at least, he said.  I came to the inaugural meeting of the Jerusalem Scrabble Club, and have been coming ever since.  In Week 5 of Season 2, I played one of my earliest bingos, PICAYUNE.  It was Word of the Week and then Word of the Season.