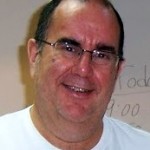 At the time I made aliyah in 2004 I was purely a ‘living room player.’  The Nationals had recently been held in my hometown of San Diego (won by GI Joel, I think), but I didn’t even know the tourney existed, nor had I ever heard of competitive Scrabble.  Indeed, in those days, my friends and I played by ‘house rules.’  If, for example, your rack had three or more of the same vowel, you got to trade without losing your turn!

Joe Weisblatt, my neighbor and friend in Bet Shemesh, had unfortunately had a mild heart attack around the time of our aliyah.  Among other advice from his doctor was to take up a hobby.  He chose Scrabble and starting going to the Tel Aviv club. I tagged along.  (They were using US dictionary at the time, but not for much longer.)

I’ll never forget one of my first games in Tel Aviv, early 2005.  Told that I was to play the reigning national champion, I was shaking in my boots. That’s how I met Hilda Ben Nun, who had won the Chanuka tourney the month before. I was absolutely dumbfounded when I beat her.

About a year later, when going to Tel Aviv became less convenient and our attempt at a Bet Shemesh club was failing, I started coming to the Jerusalem club.  I remember my last game on that first night was against Zev [Kesselman].  I didn’t know he was at the top of the club.  I played out with REVOICE and won by a few points.  As I left the building, he asked me to come back so he could take revenge. I gave him that chance and he got his revenge — again and again and again. So much so that I once suggested to David Litke — then club director — that in the same way the top player in division B gets promoted to A, why can’t the top player in A get promoted — OUT OF THE CLUB?!!